THE GOONIES Benefit Screening at the Luke
Friday March 27, 2015
Marjorie Luke Theatre
Santa Barbara Junior High School and the Luke Theatre present a March 27 screening of Steven Spielberg's THE GOONIES, an adventure comedy that is a favorite of Santa Barbara High student Grace Fisher. Grace has been diagnosed with acute flaccid myelitis. The event is free, however donations will be accepted for the Fisher family.
The Film Plot:
Posted by SantaBarbaraTalk.blogspot.com at 4:07 PM 0 comments

Attendees are invited to roll up their sleeves and take part in workshops by craft artists and designers. The workshops offer instruction at all skill levels and most include tools & materials. Workshop projects include wirework, enameling, jewelry design, polymer clay, crystal setting, bead making, art clay, hand knotting, mixed media, and chainmaille.

Posted by SantaBarbaraTalk.blogspot.com at 3:19 PM 0 comments

On March 21st at 7:30 pm and March 22nd at 3:00 pm, the SB Master Chorale will present a work of tremendous power and beauty, Canto General. This uniting of poetry by the Chilean Nobel Laureate, Pablo  Neruda, with music by the eminent Greek composer Mikis Theodorakis is both moving and vibrant with Latin rhythms. Performances will be at the First United Methodist Church (Garden and Anapamu streets). Tickets are $22 general admission, $20 senior/disabled, $12 students with ID, children in K-12 free. Available at Chaucer's Books, Tecolote Book Shop, and at the door.

The Santa Barbara Master Chorale is a community chorus committed to enriching the cultural life of the Central Coast by presenting the world's finest choral music, accompanied by professional orchestras and soloists, at affordable ticket prices.
At the same time, we help participating singers improve their musical knowledge and performance skills, and actively promote an interest in choral music to diverse audiences with a special focus on young people.
Posted by SantaBarbaraTalk.blogspot.com at 10:30 PM 0 comments 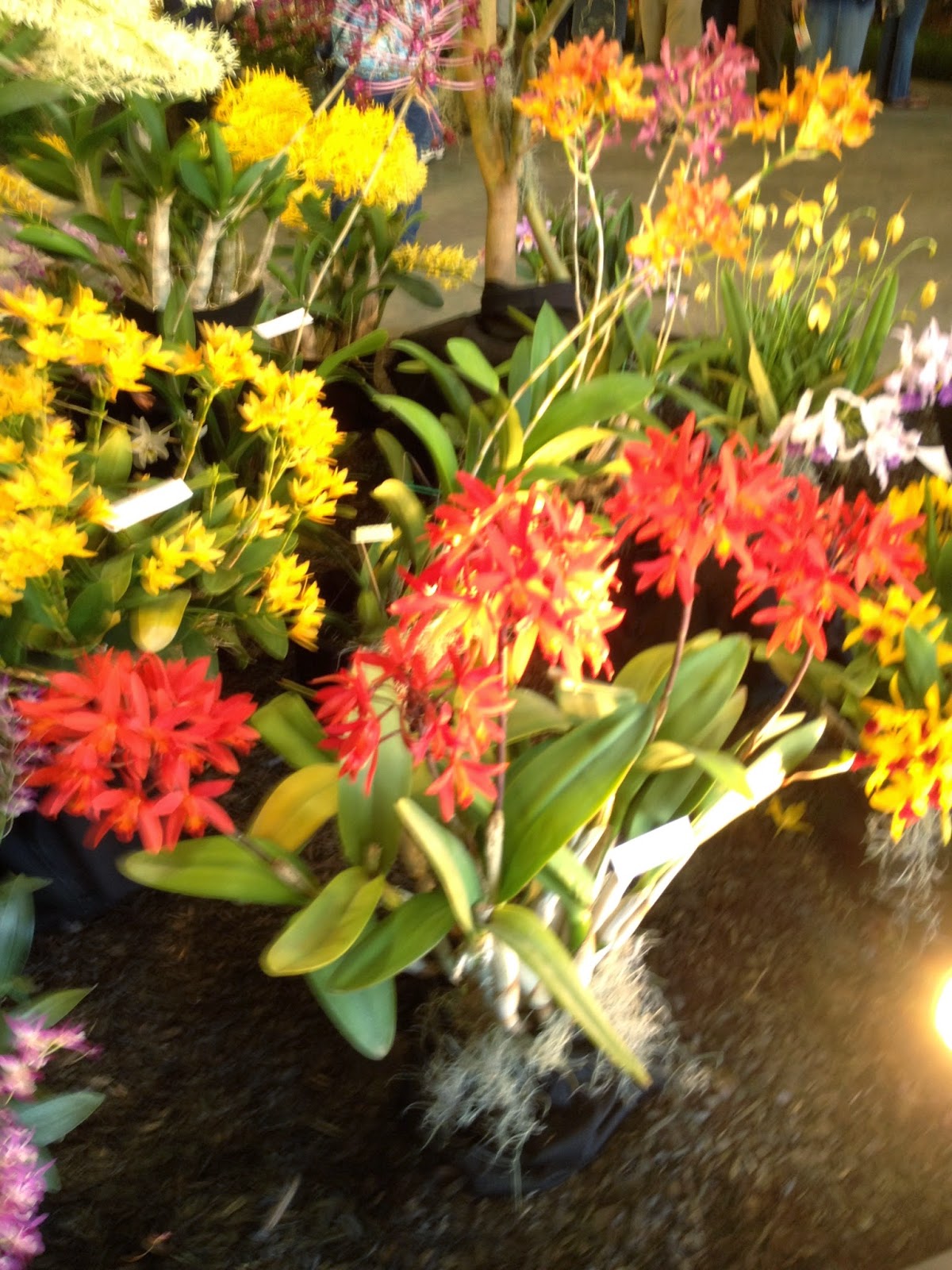 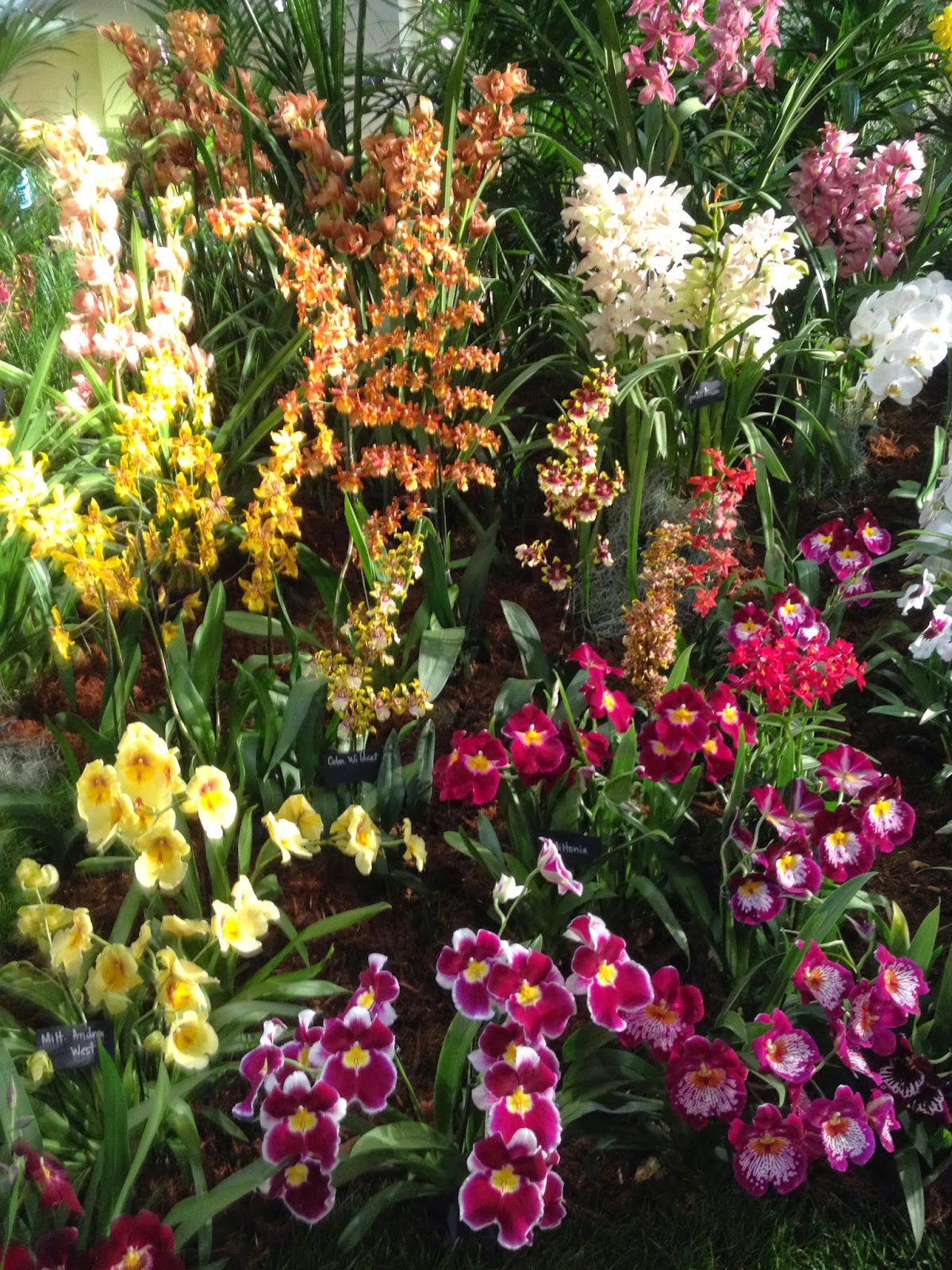 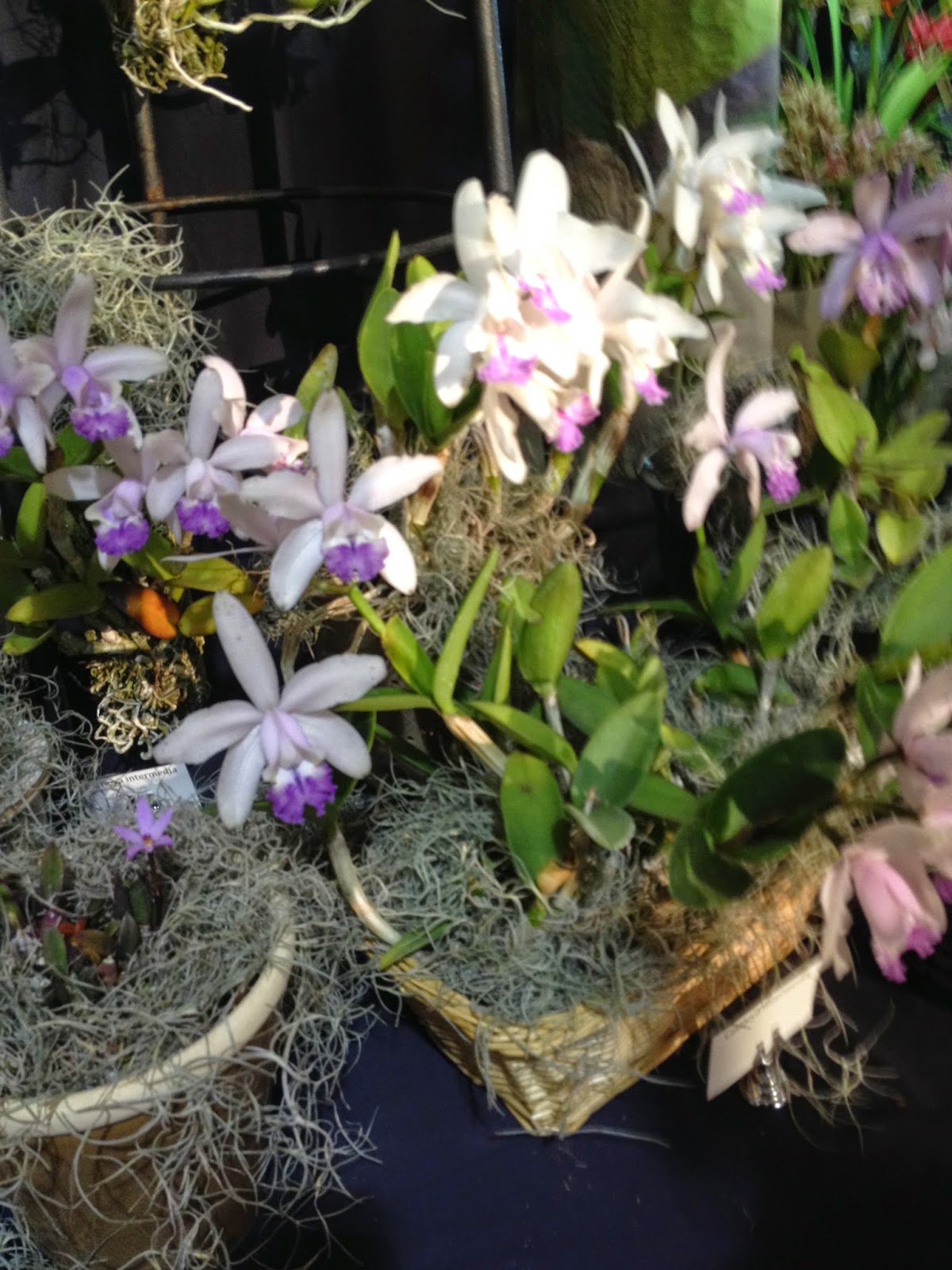 The Santa Barbara International Orchid Showl
marks its 70 year with the theme “Celebrate with Orchids.”
Avid photographers, interested gardeners, enthusiastic orchid growers or those who simply enjoy the captivating beauty of orchids will marvel at this most diverse and complex of plant families on display in intriguing garden exhibits and floral arrangements by top local, regional and international growers. A juried exhibit managed by the Santa Barbara Art Association allows visitors to experience orchids as the focus of fine art and photography. The extensive sales area includes regional, national, andinternational vendors offering thousands of blooming orchid plants, orchid
Come enjoy the fabulous world of orchids in beautiful Santa Barbara, California!

Posted by SantaBarbaraTalk.blogspot.com at 10:30 AM 0 comments

SOURCE: SYDNEY GARDNER FOR CALM
The CALM Auxiliary is thrilled to announce the 29th annual Celebrity Authors’ Luncheon, one of Santa Barbara’s most cherished literary events, to benefit CALM’s vital programs to help prevent child abuse, and treat children and families who have suffered from violence and abuse.
The luncheon will take place at 10 a.m. Saturday, March 14 at Fess Parker’s DoubleTree Resort.
This year’s celebrity author lineup includes Cindy Chupack, Kelly Corrigan, Andrew W. Marlowe and Hank Phillippi Ryan. Andrew Firestone will serve as master of ceremonies for the event, and Debby Davison and Tom Weitzel will interview the authors.
Book sales and signing will begin at 10 am. Lunch will be served at 11:45 a.m., and author interviews will begin at 12:45 p.m.
Tickets are $150. For tickets and event information, please call 805.969.5590 or click here. All ticket proceeds and a percentage of book sales will benefit CALM, the only nonprofit in Santa Barbara County focused solely on preventing, and treating child abuse.
CALM Auxiliary members Becky Cohn and Carolyn Gillio are co-chairing the luncheon for the fourth year in a row, and shared, “This event is a great way for people in the community to come together and support a valuable cause, while celebrating the authors and their work. We feel fortunate to be a part of the magic to help CALM achieve its mission of protecting families from abuse.”
Since 1986, the CALM Auxiliary women have raised well over one million dollars to help children and families in Santa Barbara recover from the devastation of child abuse, and to live happier, healthier lives.
More about this year’s interviewed authors:
Chupack, author of The Longest Date — Life as a Wife, has won three Golden Globes and two Emmys for her work as a writer/producer of HBO’s Sex and the City and ABC’s Modern Family. Chupack’s other TV credits include Everybody Loves Raymond, Coach and the romantic comedy Love Bites (which can be viewed on Hulu.com). She has written about dating and relationships for many publications and had her own column in Glamour and O, The Oprah Magazine. She now lives in Los Angeles with her husband, her St. Bernard, and ... you’ll just have to read the book.
Corrigan is a graduate of The University of Richmond and received a master's degree in literature from San Francisco State University. Glitter and Glue, Corrigan’s third book, debuted at No. 2 on The New York Times Bestseller List last February. Her paperback is the inspiration for the Glitter and Glue for Good Tour, a string of 16 fundraisers for the causes her readers care about most. Her goal is to raise $1 million for these nonprofits, CALM being one of them. She lives in the San Francisco Bay Area with her husband and their two daughters.
Marlowe is the creator and executive producer of the award -inning television series Castle, which is in its seventh season on ABC. Marlowe received his bachelor of arts degree in English literature from Columbia University and his MFA in screenwriting from USC’s School of Cinematic Arts. In 1992 he received the prestigious Nicholl Fellowship in Screenwriting from the Academy of Motion Picture Arts and Sciences. Marlowe’s first produced screenplay was the action blockbuster Air Force One, starring Harrison Ford and directed by Wolfgang Petersen. Other credits include the Arnold Schwarzenegger millennial thriller End of Days and the sci-fi thriller Hollow Man. He was the founding chair of the USC School of Cinematic Arts’ Alumni Development Council, and serves on the Board of the Writers Guild Foundation.
Ryan, author of Truth Be Told, is the investigative reporter for Boston’s NBC affiliate. She has won 32 Emmys and 10 Edward R. Morrow Awards for her groundbreaking journalism. The bestselling author of four mystery novels as well as The Other Woman and The Wrong Girl, Ryan has won three Agathas, in addition to the Anthony, Macavity, Daphne du Maurier, and Mary Higgins Clark Awards. She is on the Board of Directors of Mystery Writers of America and is past president of Sisters in Crime.
In addition to the interviewed authors, the following authors will also attend the event and be available for book signing:
» Erin Graffy de Garcia, Old Spanish Days: Santa Barbara History Through Public Art
» Dee Elias, Confessions of a Beatlemaniac
» Eric Friedman and Celeste Barber, Ghosts of East Berlin
» Margaux Froley, Escape Theory
» Mickey Gilbert, Me and My Saddle-Pal
» Rich Grimes, OLD: Stories of Aging and Reflections on Caregiving
» Fredric Hunter, The Girl Ran Away
» Hollye Jacobs, The Silver Lining
» Frances Mead-Messinger, Silhouettes on the Wall
» Karen Roberts and Dana Simpson, Journeys: Healing Trough Nature’s Wisdom
» Judy Scher and Dr. Jewell Coburn, Let the Clock Run Wild: Wit and Wisdom From Boomers and Bobbysoxers
» Nancy Spiller, Compromise Cake: Lessons Learned from My Mother’s Recipe Box
CALM was founded in 1970 to reach stressed parents before they hurt their children. CALM continues to be the only non-profit agency in Santa Barbara County focusing solely on preventing, assessing, and treating child abuse and family violence through comprehensive, cutting-edge programs. CALM offers children, families, and adults a safe, non-judgmental, caring, and strength-based environment to heal and increase family well-being.
For more information about all of CALM’s services, please call 805.965.2376 or click here.
— Sydney Gardner is a publicist representing CALM.
Article from Noozhawk

Posted by SantaBarbaraTalk.blogspot.com at 10:23 PM 0 comments

10 am to 3 pm
The 50th annual Santa Barbara Doll Club Show & Sale will be held from 10 a.m. to 3 p.m. Saturday, March 10, at the Earl Warren Showgrounds, in Warren Hall, at the Las Positas exit in Santa Barbara.
The annual show features the finest doll dealers with an array of dolls including antique, vintage, modern, artist, and reproduction dolls, Teddy Bears, accessories, paper dolls, doll parts, wigs, hats, shoes and more.
This year marks the 50th anniversary, and Xenis Dolls of British Columbia will be the featured doll artist and a special anniversary exhibit by the Santa Barbara Doll Club will be on display.
Attendees will receive a gift bag in appreciation of their continuing support and enjoy birthday cake and door prizes will be held throughout the day.
Patrons are welcome to bring one doll for free identification to the show where a doll repair vendor will also be in attendance.
The admission cost is $5 and free for children 12 and younger.
The proceeds from the show will benefit local charities including Direct Relief, Girl’s Inc, Adventures in Caring, Teddy Bear Cancer Foundation, Christmas Unity, Shelter Services, Hospice, Food Pantry, the Boy’s and Girl’s Club and the library.
For more information about the event or the Santa Barbara Doll Club, call 733-1261.
Admission $5, children under 12 and under free.
Posted by SantaBarbaraTalk.blogspot.com at 8:17 PM 0 comments