Halloween began as the ancient Celtic festival of Samhain, which marked the end of the harvest and the beginning of winter, when the Celts believed spirits of the dead returned to earth.

History of the Jack-O-Lantern

Every October, carved pumpkins peer out from porches and doorsteps in the United States and other parts of the world. Gourd-like orange fruits inscribed with ghoulish faces and illuminated by candles are a sure sign of the Halloween season. The practice of decorating “jack-o’-lanterns”—the name comes from an Irish folktale about a man named Stingy Jack—originated in Ireland, where large turnips and potatoes served as an early canvas. Irish immigrants brought the tradition to America, home of the pumpkin, and it became an integral part of Halloween festivities. 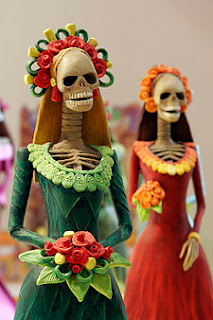 Day of the Dead (Spanish: Día de los Muertos) is a Mexican holiday celebrated throughout Mexico and around the world in other cultures. The holiday focuses on gatherings of family and friends to pray for and remember friends and family members who have died. It is particularly celebrated in Mexico, where it is a national holiday, and all banks are closed. The celebration takes place on November 1, in connection with the Catholic holidays of All Saints' Day and All Souls' Day (November 2). Traditions connected with the holiday include building private altars honoring the deceased using sugar skulls, marigolds, and the favorite foods and beverages of the departed and visiting graves with these as gifts. They also leave possessions of the deceased.
Scholars trace the origins of the modern Mexican holiday to indigenous observances dating back hundreds of years and to an Aztec festival dedicated to the goddess Mictecacihuatl. The holiday has spread throughout the world: In Brazil, Dia de Finados is a public holiday that many Brazilians celebrate by visiting cemeteries and churches. In Spain, there are festivals and parades, and, at the end of the day, people gather at cemeteries and pray for their dead loved ones. Similar observances occur elsewhere in Europe, and similarly themed celebrations appear in many Asian and African cultures.
(information and photos from Wikipedia)
As a child growing up in the Netherlands, we celebrated All Saints Day and All Souls Day by visiting the family's grave sites.  Children would create shadow boxes and go around to neighbors to show them off and collect candy.   Our costume dress up days were held during carnival time just before the beginning of lent and fasting.  I still have great memories of those times!
It seems that every culture  enjoys a time for dressing up in costumes to celebrate a local holiday.  Kids and adults alike enjoy "dressing up" in costumes and Halloween is a fun time to do it. I have 3 big boxes of Halloween decorations!  I remember when my husband and I went as "little Red Riding Hood" and the "Big Bad Wolf"...but that's for another post!
Posted by SantaBarbaraTalk.blogspot.com at 4:20 PM 0 comments

Day of the Dead Celebration
Santa Barbara Museum of Art

For the 23rd year, the Museum honors the
Mexican tradition of remembering the dead
with a variety of family festivities in the galleries
and back plaza including music and dance
performances, art-making activities, bilingual
storytelling, a special display of altars created
by school and community groups, and
traditional refreshments.

Free
Click Here For More Information
Click here to download the Kids and Families
Fall/Winter Programs Brochure
Click here for a listing of all upcoming programs
for Kids & Families.
Free Family Days and all other Family Programs are
made possible through the generosity of the Schlosser Family Trust.
Additional support for Dia de los Muertos Free Family Day
is provided by Wells Fargo.

Posted by SantaBarbaraTalk.blogspot.com at 10:25 PM 0 comments


Posted by SantaBarbaraTalk.blogspot.com at 7:17 PM 0 comments

Posted by SantaBarbaraTalk.blogspot.com at 4:51 PM 0 comments

20th ANNIVERSARY OF THE
CALM Antiques and Vintage Show and Sale 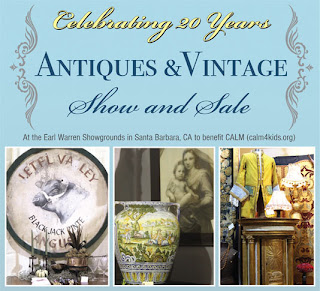 Posted by SantaBarbaraTalk.blogspot.com at 11:19 PM 0 comments

Yummmmmmmmmmmmm!
Get Ready For The
Annual Harbor and Seafood Festival
October 13
10 am to 5 pm 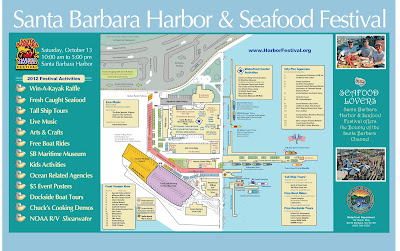 Fishermen and seafood vendors will provide a
bounty of lobster, crab and more at the Festival. 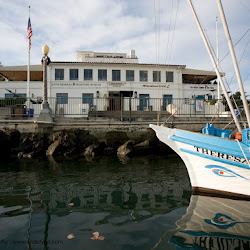 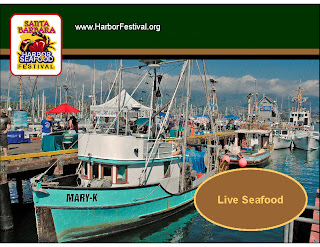 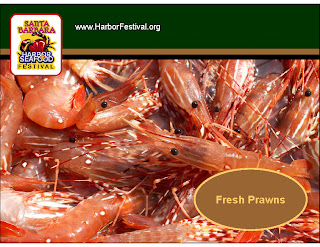 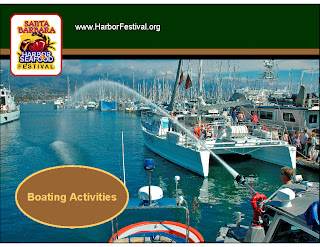 Posted by SantaBarbaraTalk.blogspot.com at 3:21 PM 0 comments 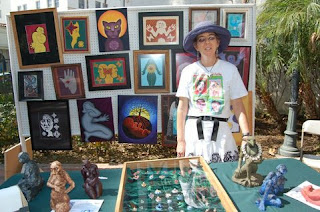 hosted by the
Mental Wellness Center
Posted by SantaBarbaraTalk.blogspot.com at 11:13 PM 0 comments

Celebrates Exceptional Dining Experiences
along with the area's magical ambiance

To us here in Santa Barbara and the surrounding communities of Goleta, Carpinteria, Summerland and Montecito, October is the time when we come together to commemorate the bounty that 300+ days of sun every year brings, including fruitful fields, loyal vines, sustainable seas, happy people and laid-back autumn traditions.

It’s epicure.sb—a celebration of cuisine, libations and culture—or, as some have come to call it, a month to savor Santa Barbara. Now in its fourth year, epicure.sb has grown into a community-wide extravaganza when our crop of exceptional artistic and culinary talent converge for 31 days. 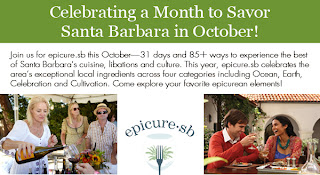 Posted by SantaBarbaraTalk.blogspot.com at 1:07 PM 0 comments